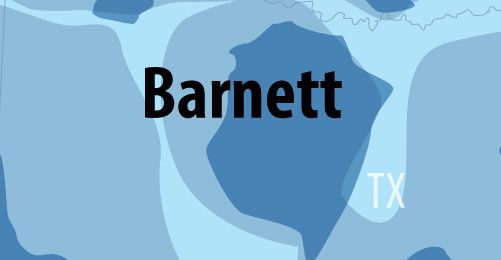 The Barnett Shale was named after John W. Barnett, namesake of a nearby San Saba stream where the shale outcrop was discovered in the early 20th century during a geological mapping expedition. In 1981, Mitchell Energy discovered the associated “Newark, East Gas Field” while drilling the “C. W. Slay #1” well in Wise county. The formation covers about 5,000 square miles in the Bend Arch-Fort Worth Basin, extending into at least 24 counties in North Texas, heading south and west from the Dallas-Fort Worth area.

In the 1980s and 1990s, George P. Mitchell went against conventional wisdom and developed horizontal drilling and hydraulic fracturing techniques that turned this “tight” gas reservoir into a productive play, and started a revolution across the nation. Royalty Clearinghouse aggressively acquires Barnett minerals. We are determined to expand our Barnett holdings.