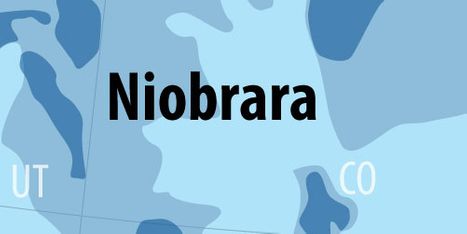 The Niobrara Formation produces gas and oil in the Denver and North Park Basins. The Denver Basin, also known as the Julesburg Basin (after the town in Colorado) or the D-J Basin, is a large productive area centered in eastern Colorado that extends into southeast Wyoming, and the western parts of Nebraska and Kansas. In 1901, the Boulder Oil Field was discovered when the “McKenzie” well found oil in the naturally fractured Pierre Shale in Boulder county.

Recent activity includes the application of horizontal drilling and hydraulic fracturing to directly tap oil in the source rock. The Wattenberg Gas Field, just north of the Denver area, produces gas from several formations like the J, Codell, and Niobrara, to name a few. This area is known as a “stacked play” due to these multiple productive formations. There are also shallow gas fields producing from the Niobrara in Yuma, Phillips, and Washington counties in northeastern Colorado as well as Cheyenne and Sherman counties in northwestern Kansas.